When a group has conflict, get curious about the forces influencing that conflict.

We often can’t see those forces so we pay attention to what we do notice in the moment–the behaviors that are getting in the way. So we intervene at the Individual level and tell someone to change their attitude. Or we start at the interpersonal level (after all, conflict occurs between at least two people) and we notice incompatible communication styles or a lack of mutual respect. While those might be valid observations in need of corrective action, it can be challenging to change an individual’s beliefs and ability to regulate emotions.

“Noticing the agitation and defensiveness that people displayed as a discussion became deeper and more personal, I came up with the idea of dealing with problems at the shallowest level at which they could be usefully addressed,” writes Roger Harrison in “Choosing the Depth of Organizational Intervention”

His idea can be captured in the phrase “snorkel before you scuba.”  Harrison defined four levels of system intervention: structure, dynamics, interpersonal, and individual. By intervening at the shallowest level, we can sometimes affect changes that ripple down and influence changes at deeper levels.

For example, I recently worked with a group that could be described as toxic. People did not like each other. They wanted to be left alone at their desks to do their work. I learned that because their meetings had become tense a few years earlier, the manager decided that no unnecessary meetings would be held–which really meant  they never met.

I could have designed a fantastic training for improving their social intelligence and compel them to believe the benefits of working nice together. But I figured that if the group met more regularly, and actually got to know each other during the meetings, they might actually find ways to work more effectively together. So we instituted weekly meetings, used good meeting management tools, and over time the group learned that they could hold effective meetings, get more done, and actually enjoy being around each other.  This structural fix was much easier to implement than telling everyone they had to like each other and get along. 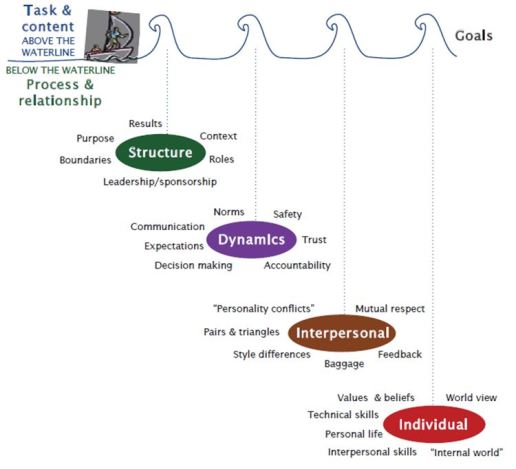 Look for ways to intervene in organizations that are more homeopathic than allopathic, more oriented to wholeness and healing than to overcoming resistance to change. –Roger Harrison

Sponsored by the King County Office of Alternative Dispute Resolution